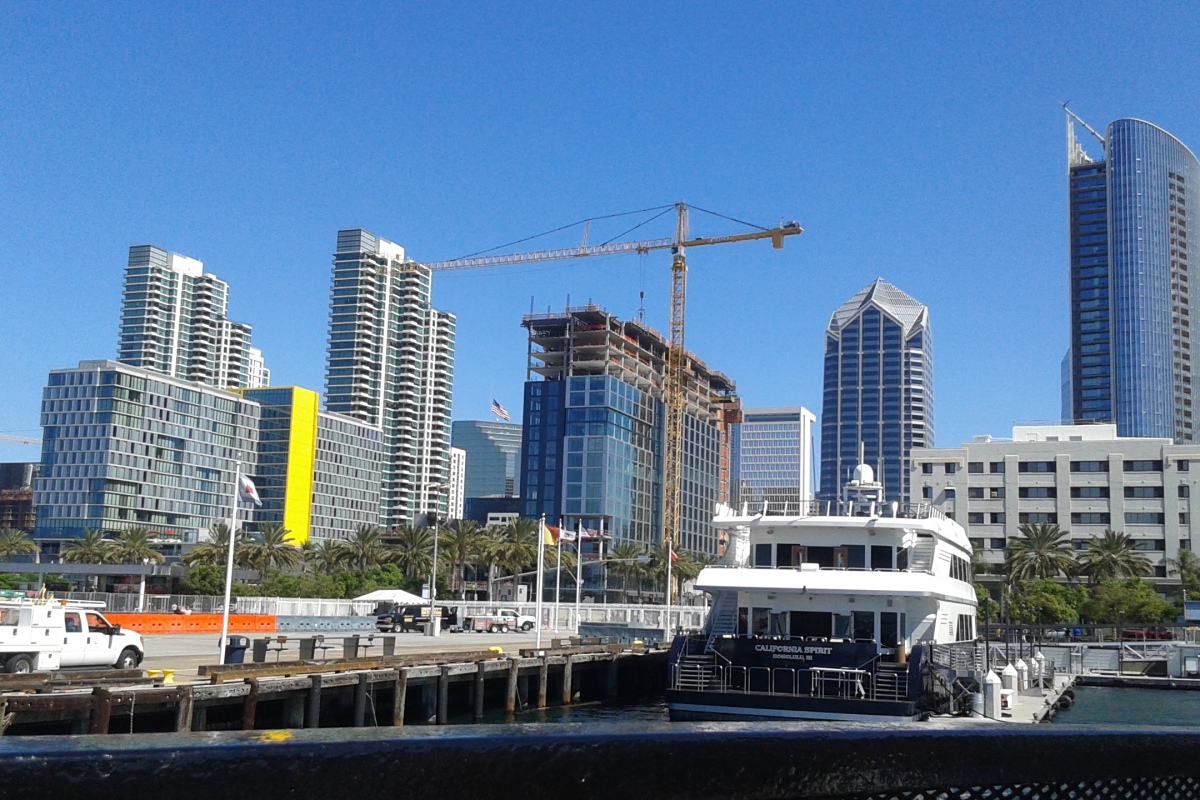 in the morning i take off again and go to baja, mexico. i am so excited i can hardly stand myself! i feel like, in some ways, i’m stepping off into a complete unknown. i’ve read all kinds of journals about other bike tours on the fantastic website crazy guy on a bike. if you are curious at all about bike tour in any way, i highly recommend people check it out! so many good journals. so i thought i should catch everyone up before i head out.

i decided to take a train from los. angeles to san diego. the pacific surfliner makes it easy to just roll your bike onto the train. this however, was not my experience. i got to the end of the platform where the bike car would be, very nice conductors pointed me in the direction. when it arrived, though, they were using an old cargo car. i was kinda pissed. so instead of just rolling the bike on and then i could take the panniers off, i had to quickly unload everything so that we could lift the bike up over our heads to the people in the cargo area, and then the bikes were just laying on the floor of the car. it doesn’t look like there was much damage, but my seat was all askew when i jumped on it later.

that being said, it was nice to just kick back and enjoy the ride without expensive campsites, since they have removed most of the hiker/biker sites, or crazy southern california traffic and industrial nonsense. the ride took about 3 hours, so i was able to get some writing and reflections done.

the person i stayed with in l.a. i had met while walking the oregon coast. he was biking form portland back to l.a. we had shared a shuttle ride and campsite…and beers during a ridiculous rain storm. it was nice to catch up a little, but he was busy and just gave me free reign of his house in the hills. i was able to finally wash some cloths and then walk the streets of l.a. i’m glad i decided to take a day here.

i found a queer coffee shop that i really enjoyed being at, cuties coffee bar. it was fantastic being around a bunch of queers that are strangers. i heard all kinds of fantastic conversations about people trying to figure out when to disclose certain aspects of themselves, or how to talk and work through consent, experiences of people trying to navigate the binary world as a non-binary person…it was good for my soul.

on the way there i also got to pass by the meditation center run by against the stream. i’ve read the books and listen to the podcast, so it was nice to actually see one of their centers. i hoped i would be able to join in on a meditation with them, but there wasn’t going to be one i could make, so i just smiled tucked the view into my memory for next time i tune in.

as nice as all the experiences and such i had in l.a. i was happy when it was time to catch the train and head to san diego.

the week i’ve spent here in san diego has been super! i really like it here. the friends i’m staying with are so amazing in all the things they do. they live in the gayberhood and i’ve become a staple at one of the coffee shops. i even went to, not one, but 2 bars for women. i don’t know what it is about gay bars and neighborhoods, but i don’t think they have changed since the mid/late 80s! it is ridiculous! the music. the hair. the outfits…..all of it! i have in some ways really missed going to the gay hoods, but they are just too conservative for me. i’m glad they are there. it’s still good to have a place to feel somewhat safer for a second, but the assimilation is so palpable that it unnerves me after a minute of time (is rainbow washing a thing?)….defiantly the gay hood and not very queer at all!

i got to spend some fantastic time in balboa park. one of the people i’m staying with borrowed a pass so that i could get into the museums there for free! there were some super exhibits too! but museums, after a time, creep me out too. especially if they have relics from ancient indigenous peoples. the museums had notices up everywhere that they had certified that all of them were attained legally and ethically. i’m sure they were, as much as possible, but how is that ever really going to be true on/in occupied land? i don’t have the answers, but i do enjoy reflecting on how we acquire things in our lives, what and why we choose to display/share them. i believe that art and creativity is a basic need and how do we make time and space for participating in one way or another is important.

with all that being said, one of the reasons i stayed longer was to attend the san diego zine fest! it was super! it was in the cento cultural de raza on the edge of balboa park. now, i haven’t been to many zine fest outside of portland, but i really liked this one! there were so many people of color, women, and some of the zines were even in other languages. plus, i finally got to meet some folks i’ve been wanting to meet for a long time. more than anything, i was inspired to just create and put my ideas out there, and encourage others to do the same! there are all these ideas about being good enough, articulate enough, just enough in general. i have friends encouraging me to just start submitting things; can’t get something accepted if i’m not first prepared to get work rejected, so might as well start.

one thing i’ve been hoping to do out here is take time to clean stuff up and start sending work out, but its funny, with all the time in the world to do what i want, i just keep staring off into the deep-sea. something about it just erases my ability to do anything but take it in. when i finally pull myself away, i feel refreshed and renewed, but blank too. then when i arrive some place, i end up in conversations with someone. how does this happen? as a pretty solid introvert, i have become a chatter. i can stop in someplace just to use the wifi, or get a snack, and end up in hours long conversation with someone i just met. then i have to get back to my day.

so here i go, off to another country. one i have been to before, but not for a very long time. i look forward to getting into a new rhythm, a new language, new monetary exchange, and in the spirit of such, i have switched all my measurements to the metric system. so if i share my “mileage” it will be in kilometers. i also want to start working with robin wall kimmerer’s pronoun usage for nature that she writes about. i want to test it out and see how it feels. i will probably mess up a lot, but i do believe that nature is not an it. and though i am not into the binary usage that we deal with for humans, i want to personalize nature a little more. so the singular is ki and plural is kin.

cheers to the next section.

One thought on “final days in california…for now”