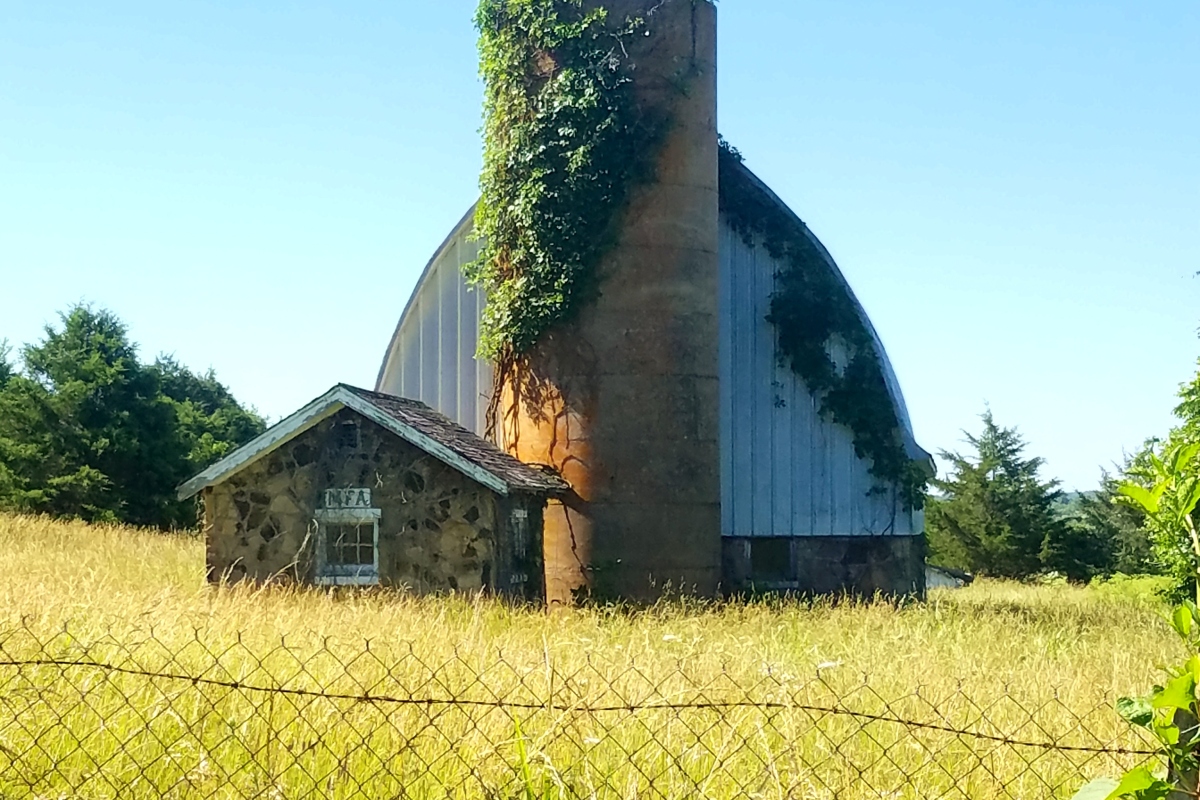 what a funny time i have had so far.

i did not want to ride a loaded bike through kansas city. for some reason it just struck a deep fear in me. i like the idea of leaving directly from my friends house. i even had a route that others have riden. i finally picked a day and my buddy took me out to pleasant hill where the rock island spur trail takes off.

we explored some of the area the route is suppose to eventually go, checked some potential flood areas, all was clear. he, and his amazing pup, took me to the town park and we sat for a moment and shared some gratitude. i have no idea how to repay this man, and the dog(s), and his boyfriend! what wonderful, generous, loving humans! they made me dinners, they let me cook for them. and they gave me space to figure shit out! the only thanks i can think of right now is to have a most excellent adventure! and indeed so far it has.

pleasant hill was very pleasant. the town park was nice. the lake amazing. sunset, moonset, sunrise, and so many birds singing and fish jumping. i took my time leaving town. had a nice greasy spoon breakfast at the diner and enjoyed the amazing bike paths through town! kansas ciy, you could learn something from this little town. 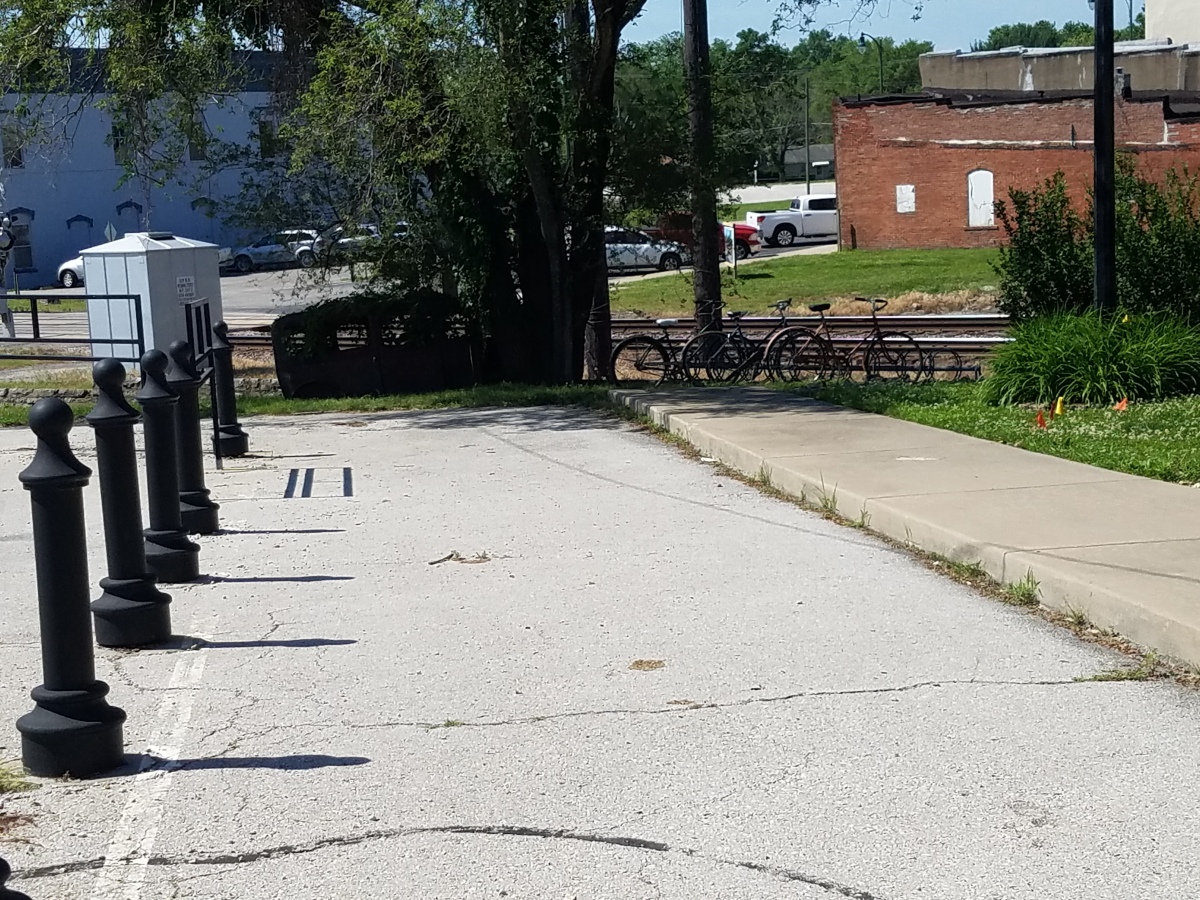 from here i rolled into chillahooa. the corner market was closed, but i noticed an area across from the park that looked like camping spots. there was a group of women gathered at a house next to it, so i asked about camping. they were so nice and friendly. they offered some ideas where i might find water. when we realized all the spicketts had been turned off, they showed up later with a big jug of ice water for me. i later learned that the house they were at is unoccupied and there is a movement to turn it into a hostel for people biking through…and probably horses as well…multi-use after all! p.s. i have riden around so much horse shit, i am going to start pooping on the trail too!

that night it rained and rained hard! there was rolling thunder and so much lightening! these are the moments that i am happy to be carring a full on tent. i keep thinking i could go with a bivy and/or a tarp, but wow! when these storms roll through, i am happy with my set up.

i walked up to the little market for breakfast and met a couple that was riding the spur instead of the katy trail. they had wanted to do the bed and breakfast tour of the katy, but settled for this, for now. they were so nice. she was newer to bike touring than him, but she invested in an ebike that has a tour setting, so she can get out and have adventures. amazing. we will find a way when we want to.

from here i tried to camp outside of clinton, but the lake and area is flooded, so hotel it was…and catch up on handmaid’s tale. then its been a series of more small towns and city parks. humansville was super interesting. i rolled into town and went to city hall where the woman there shared so much information with me, like where i could camp and where to pick up another rail trail called the frisco highland trail. and the adventure has officially began. 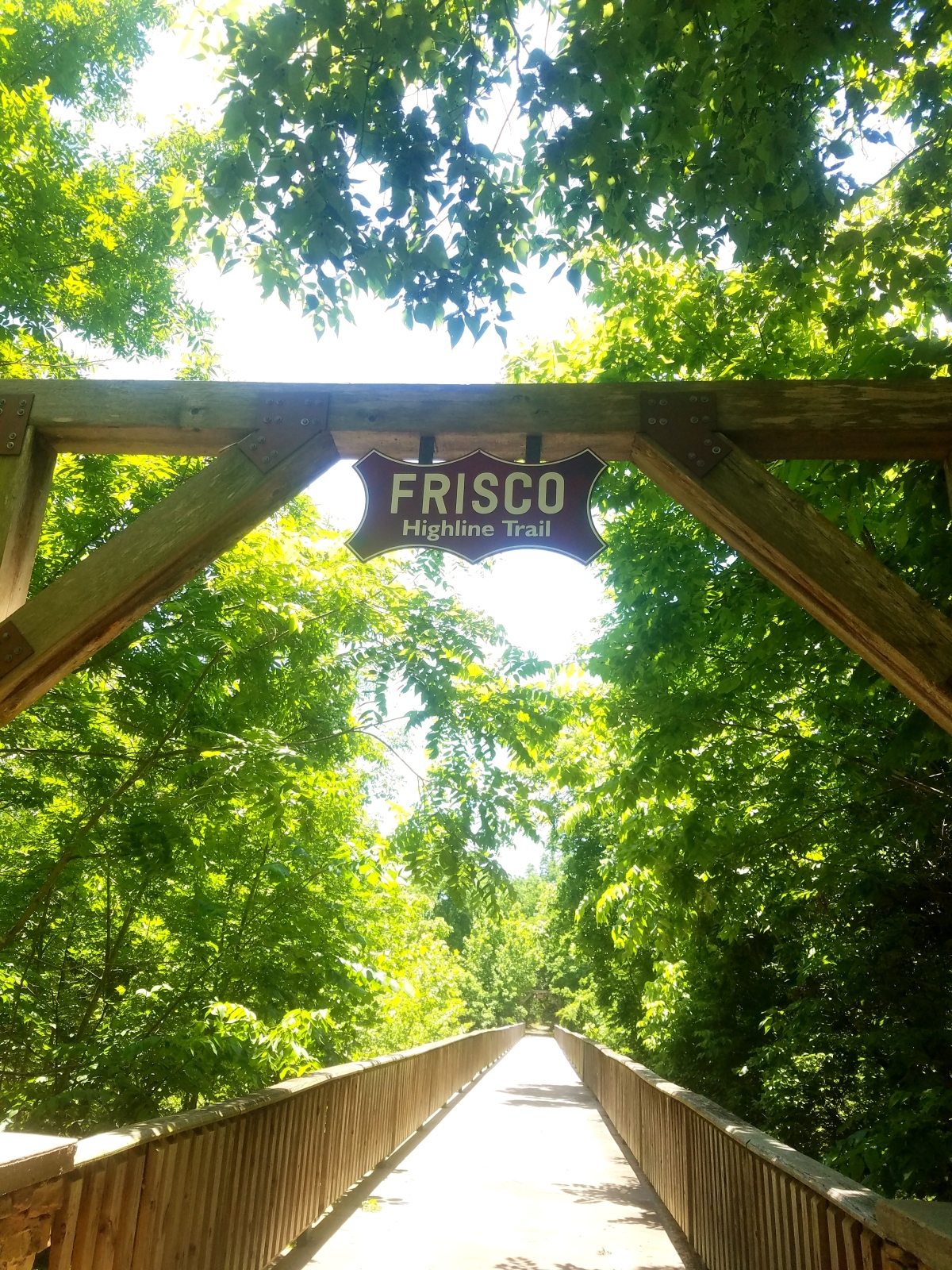 in bolivar i had stopped for a late breakfast and picked up the rail trail. on the list of places to notice along the way was a “farmers market”. i’m always interested in a local farmers market, but this one was not for me. it was all about the meat market, so i rode quickly on. the other “historical marker” on this trail that i wanted to check out was called the “hobo camp” where people riding the rails would camp out during the depression. i never saw it marked but noticed a few places it could have been, so i stopped and imagined some of my heros that may have camped there.

along the way i met two guys going the opposite direction. they have done a number of different rail trails around the country. we swapped stories and suggestions and a few laughs. just before i ran into them, i friend who tried to by me a beverage at the winery that i wanted to stay at was closed for remodeling. the people at the winery suggested i go to a town 8 miles south of my destination for the day. as i was already turning into a tired  block of salt, i said no, and then these guys told me there was some kind of festivities going on in walnut grove, and by goly there was.

the local masonic lodge does this fundraiser every year and this was the 14th or 15th year. they raise money to provide financial support for folks having some kind of family emergency like a fire, or health care, or what have you. there were bands from all over and all ages. the lodge putting it on took good care of me. one called the local police department to see where else i could camp, but then it was decided by everyone that if i was staying for the fest, i could just camp here once it was over.

i met so many wonderful people who came up and asked me what i was doing, and to let me know that this town loves bikers and welcomes anyone coming through. many folks here have traveled a great deal, mostly for military and geneology searches. many had gone to oregon for one reason or another so we got to talk about similar areas with different experiences. i was told many time that “this is as about as close to mayberry as you can get.” indeed it was. 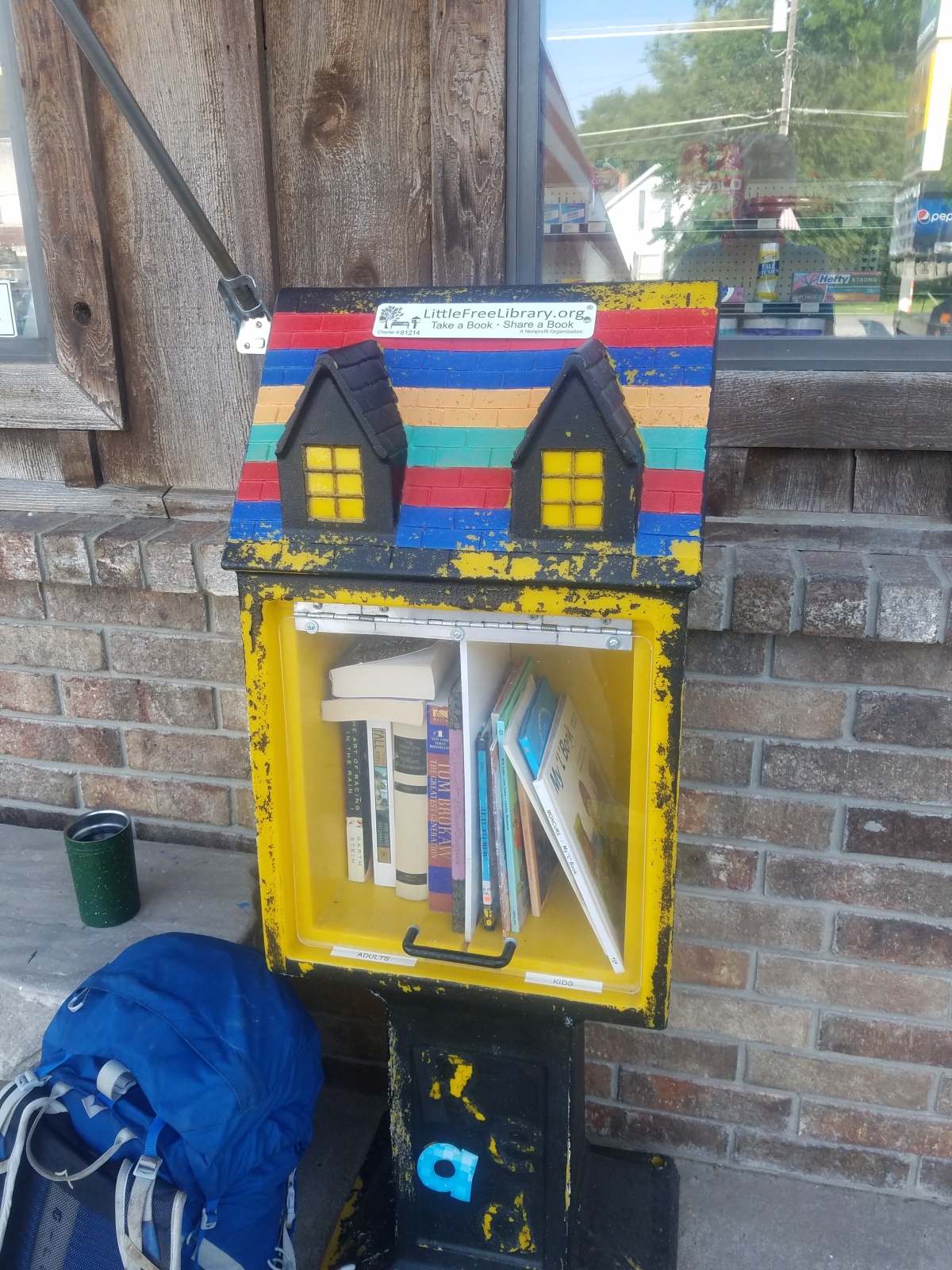 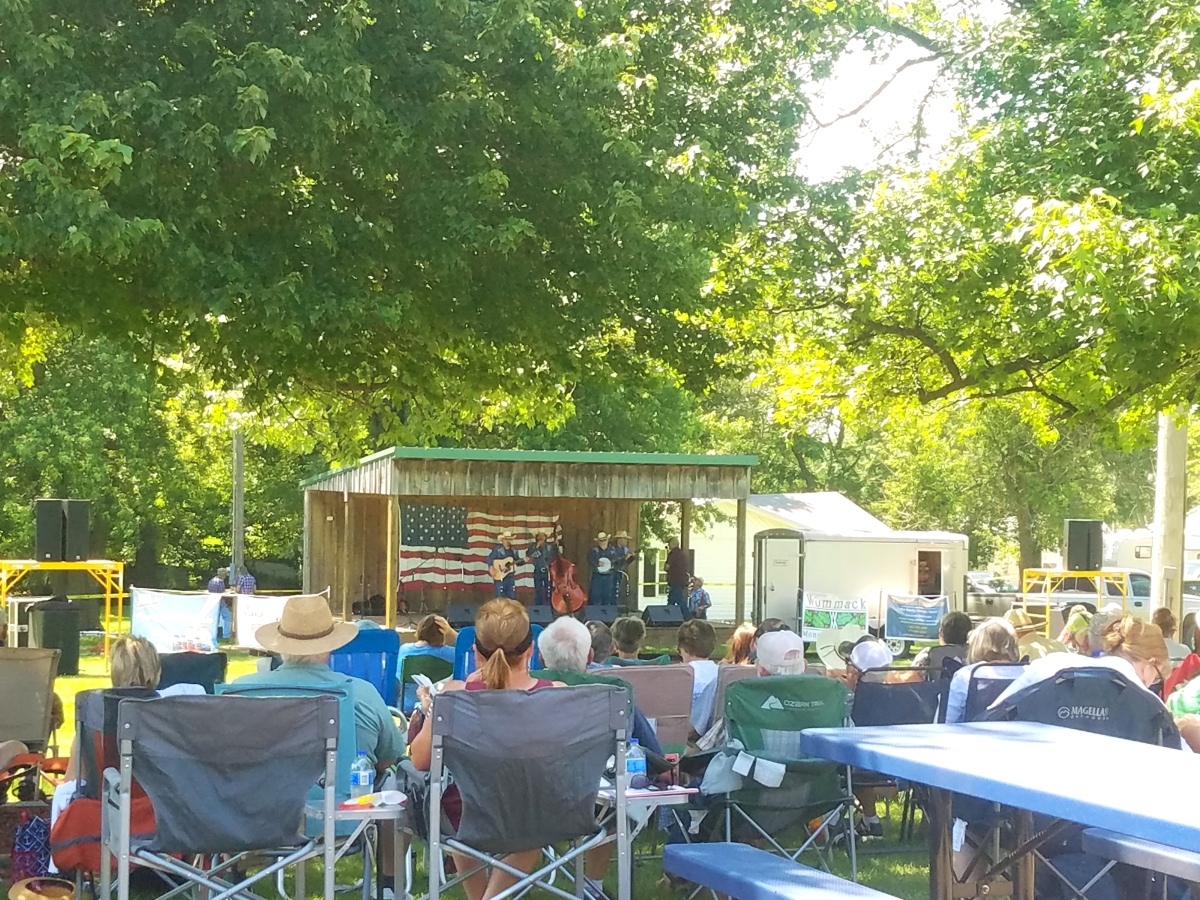 the next night a wedding was my entertainment. i had just left the police station (this is taking some geting use to…going on purpose to a police station and asking where to camp. just as i had layed out to let my body turn into a big salt block as the sweat dried, i noticed a bunch of nicly dreased people start showing up. turns out they were parking in the park for a wedding on the other side of the creek at the old mill.

i chatted with the d.j for a bit to make sure i was out of the way. he invited me to come over. instead i just listened from a distance and read. not much is open in small towns on sunday or monday either, so i went to the local market and picked up veggies and hummus and had a lovely picnic. and i realized, i am tired.

the heat. the hills. thoughts and logistics. all this adventuring. i am tired. so i road a short but hilly 16 miles into the next town rolled into a bed and breakfast, the dickey house in marchfield. at first i was concerned about it’s history. it had the look of someting that could have been part of slave labor plantatioin days, but it was built after that time frame. still has an interesting history. i was the only one staying in the main house that night and thought for sure i would have a haunting experience, but nope, nothing.

morning brought nice breakfast conversation with a family from northern alabama traveling over to branson. i think i will stay in town for another day and eat more veggies. i don’t know what it is, but i haven’t been able to eat much this week. i know the heat is a big part of it, but it feels almost like a nervous stomach. i usually keep cliff bars around for these moments, but they are just too sweet for me and keep getting sweeter. peanutbutter is my other big stapple, but i can’t stomach it either. i have some hydration mixes that i have been using, and lots of potato chips. so i think i am going to cut back my milage to 30-35 miles a day until i can work this out. this isn’t the first time this has happened, it is my usual experience backpacking or long distance biking so i’m not worried so much as paying attention and adjusting accordingly.

yesturday i met 2 women biking the trans am also. i thought they were local riders due to their “light load”. when they caught me at the library, they told me they had a support vehical that waits for them up the road, so maybe i’ll catch up to them along the way…probably not, but it would be fun to see them again. they are sisters doing this together. they are the first i met going the same direction i am, and they are the first women i have talked to. i think there were 1 or 2 in a pack i passed riding west over the last couple days.

i have to say, i think i like riding this bike route thing vs. when i have just rode roads.  but i think i have a unique experience compared to other women. men don’t usually try and tell me what to do or where to go or try to fix my bike. though the shop teacher at the high school in walnut groove did offer to open the school up for me if i needed the shop, or the locker room for a shower. i declined, but it was nice. he acknowledged it might seem a little creepy, but really i just wanted to sit and enjoy the fest.

p.s. just for grins this morning i turned on the “happy cow” app to see if there is anything vegan in the area, and there is!!!!!! it is called the polymath educational cafe! holy crap! i had a temphe blt and some pasta salad and got some snacks like a for real vegan cinniman roll! i had a lovely conversation with the owner! she sent me away with some extra treats! if you could see me, i’m doing my happy food chair dance still from my experince! if you are ever in marshfield missouri check out this cafe!

Feel the world on wheels