i finally packed up and headed of playas de tijuana. my plan was to get down to rosarito, about 30 km south of playas. i knew for sure that there was this bike shop down there and i wanted to get my bent wheel fixed. i figured if i got it fixed early enough i could just keep going south and find a place to camp. however, coming out of playas was straight up! there was no easing into it. i had looked at the elavation profile before leaving, and figured it was just a few hundred meters, should be ok, but wow! within minutes i was sucking air and drenched in sweat and my legs were burning. and as for the long tunnel? it was frightening. not because of the traffic flying by. there was plenty of room. but because it was still going straight up and now curving and the just kept building. i jumped off the bike and started pushing. it gave me time to catch my breath, drink some water, and take inventory of my situation.

this wasn’t really anything new. i’ve been through this at some level almost every day. its called bike tour, and anyone who ever thought that the world is flat has never backpacked nor gone on a bike tour. something else was happening to me. i just wanted to go home, and not just home as in back to portland or oregon, but kansas. it was a little disturbing. i have never really wanted to go back to kansas except to see friends and family. so as i climbed hill after hill alongside traffic that was flying by me i was more than a little flustered.

one thing i count on when hiking or biking is the general rule of what goes up must come down. eventually, i was able to roll downhill and into rosarito. i couldn’t decide between getting a hotel room, not something i had planned on doing until i started to get so flustered, then head over to the bike shop. however, as i rolled into town, i started to feel better so i went bike shop first, figuring that if it got fixed quickly, i would head on down the road to a camp spot.

so i rolled into the bike shop…super small and in a residential area. well i rolled my loaded up bike into the shop and started to explain what was going on. turns out, he spoke less english than i spanish! eventually, we worked it out and he stopped what he was doing and fixed my wheel. we did use his computer for a little translating. when we put the wheel back on, i asked him what i owed him and he wouldn’t let me pay. he also wouldn’t except a tip. i left with a good wheel and a hotel suggestion, and yet one more story of kindness.

it didn’t take him long to fix the wheel, but i was emotionally exhausted, so i opted for a hotel and a swim and a shower. that evening i walked down to a taqueria recommended by “happy cow” app. however, the smell of all the cooking cow turned me to this cute little cafe with an outdoor patio. it was so delightful, that i went back for breakfast. that night, i turned on some movie and started making plans to turn towards the mid-west. this wasn’t an easy decision and one i will talk about more later. but with the pressure of how to make it further south with a record heat wave off my mind, i made some playful plans.

after breakfast, i started south again. i knew that i wanted to make it down to k58 campsite. it is a fairly well-known spot for surfers to come from all over baja and southern california, and well, the more time i’ve spent around surfers, the more i like them and their relaxed laidback attitude. yet, just a few kilometers down the road, i made a little stop.

i had seen that there was a bike cafe about 15 minutes south of rosarito, but it didn’t look like anything was there via google maps. still, i kept an eye out anyway. i’d been told about this amazing bike culture in this area and that there were a few organized big rides between rosarito and ensenada. so when i saw the signs for it, i jumped six lanes of traffic and rolled up to the back porch.

i leaned my bike up against the patio’s fence and walked by these fancy pants road bikes. inside i found 3 guys of various ages in their fancy cycling gear, two women off to the side, and a young guy behind the counter. all heads turned towards me with full friendly smiles. i was asked where i was going/coming, and where was my bike? eventually they asked if they could get me anything. soon i was holding a huge cup of hot coffee and our conversations continued. it was lively and fun. eventually, the “older” guy sitting at the counter turned to me as he was going through his little seat/tool pouch and pulled out a pocket knife.

you have one of these?

yup, two. one for food and one for other things.

hmmm, you have a gun?

ha! no! i’d probably get shot.

hmmm well, your president thinks we are dangerous and bad people

fuck that guy (oh shit gotta watch that knee-jerk reaction). i mean he’s not my president. i can’t stand how he talks about or treats people. as for border imperialism…..

well. i bought your coffee.

i’m standing next to him now and reach out my hand to shake his as we continue with conversations about biking and such. when he is about 1/2 way to his bike he turns and comes back to me, now with his bike glove off.

that was a very friendly shake and i want to do it right.

so we shake again.

soon it is just me and the owner and my still very hot cup of coffee, and we continue to talk for about an hour. he was born in san diego, went to school and college in that area. moved to rosarito to be with family. his wife and her family (his wife and her mother were the two women at the shop) live in the area. he opens the shop at either 6 or 7 in the morning. leaves for san diego around 3 or 4 to work nights (the mother of his wife closes the shop). he has some kind of special pass to get back and forth quickly over the border. i actually talked with many people who do this. so if you think the people from mexico are lazy and such….come talk to me.

i didn’t want to leave this area. everyone i talked to was so kind and shared so much with me. the owner of the bike shop gave me a few suggestions of places to camp. he even said “hell, camp across the street. i open early tomorrow. come in for breakfast!”

i was so tempted. 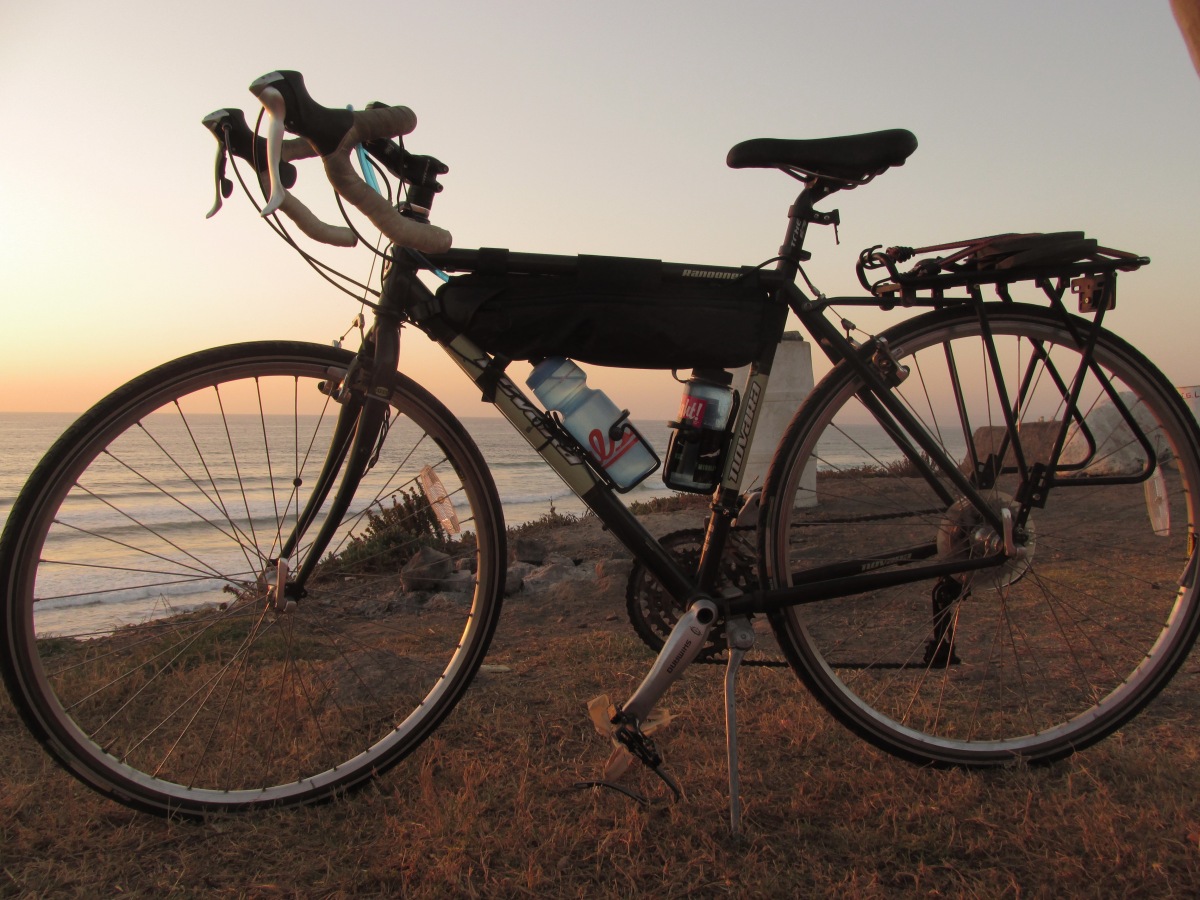 finally, i climbed back on my trusty stead (i should come up with a name for by wheeled friend). i had around 30 km to ride for the day before i could rest, and i was pretty sure it was going to be one rolly ride.