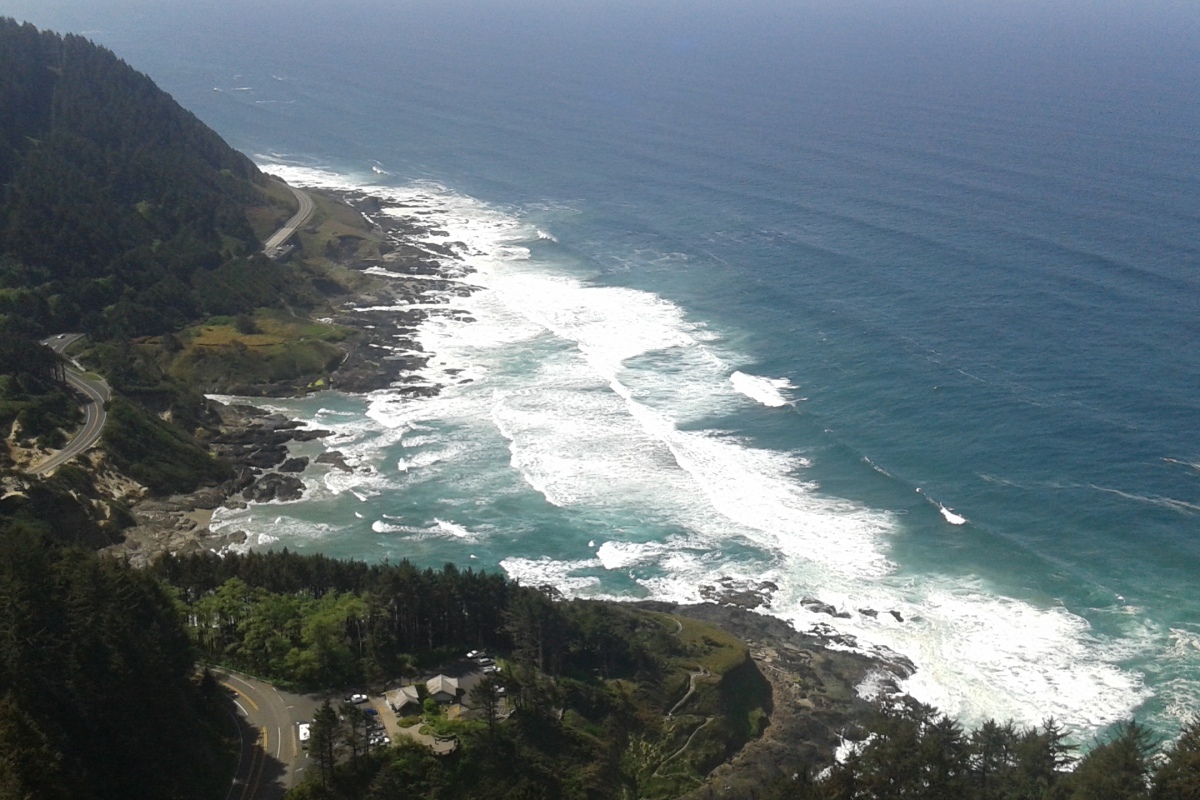 I guess checking one’s privilege is a lot like rain on the oregon coast, it never stops. however, today was, and still is, a wonderful day. it didn’t start that way. i woke early thinking great! I won’t have to pack a wet tent. then then pit pit pitter-patter began. I held my breath hoping it would pass  nope! a deluge poured down.  I started to read but opted to set a timer for 30 minutes and buried my head!

I eventually got on my way, and by the time I finished a lunch break it was a glorious day! a rounded the bay at Waldport and across the way, the whole shoreline was full of sunbathing sea lions! maybe this is what they were barking about all morning! not only was the sun out but the wind was at my back!

The view! spectacular! today the ocean was such an amazing color! maybe what some would call aquamarine? a deeper but also lighter colors of blue layered with greens tinged with more blue. and the whites of the crashing waves blowing across the tops in a strong wind. all this under a clear blue sky! I needed today. it has been nice some, but the rain has just worn me out. even when I thought I was getting a break of sunshine, it started to rain. normally I like then sunshine and rain combo. but really I just want 24-48 hours with a dry tent and dry feet.

to celebrate I may actually stay up long enough to watch the sunset! maybe.

anyway, that is not what I wanted to write about today; just needed to get that off my chest. today I want to just take a moment to acknowledge and recognize not just the privilege I have just to do this adventure, but also how privilege  effects how I’m treated out here.

for those of you who don’t know me, I’m a white, cis gendered woman/gender – queer person. I come from a mostly working-class background. I have participated in a few forms of institutionalized higher education (a debt that I most likely will never be able to pay off), I am a healthy able-bodied, fairly mentally stable, and for lack of better words right now, legal citizen of the country I’m currently in.

some other privileges I would add: I am single, queer (in more than just gender/sexual orientation, but also so many ways I move through the world), I have no children or animals that need my care. my parents and other family members are healthy, my grandparents have all passed on (I don’t think is a privilege really, but I do think I didn’t start this until the last one passed so that I could be reached if needed). I was able to acquire respectably good gear that fits me. and I’m sure I will discover more as I continue this venture.

why does it seem important to me to recognize this here and now? one of my very first conversations with someone (a middle-aged white male from the seat of his mini-van as he was headed to the same state park as I so that he could take a shower while his bathroom ws being remodeled) approached me because I “looked like a legitimate backpacker and not just some homeless person”. .  didn’t know how to respond so I said something to the effects of yes I am backpacking.

however, I am also basically homeless. I don’t have a job. maybe I could consider myself self employed since I hope to maybe make some money eventually from these shenanigans. but because he categorized me as someone he could maybe relate to, he decided to stop and have a conversation with me. so, yes, for now I can afford a hiker/biker camp site, some of wich have allowed me to take a hot shower and I’ve rested up in a hostel a couple times.

I think, also because of how I present myelf, I have been able to talk more openly to other queerdos, even if that’s not how they would identify.

I think some of this hit me as I crossed the newport bridge because I had had some really great talks with some folks at the lost buoy hostel. we talked about so many things, but one thing that sticks with me is how people using airbnb are changing the ways people travel and it is making it more challenging for folks to travel simply and cheaply. to the point that people are starting to charge for couch surfing. this is a whole other tangent around a kind of exchange economy that made up couch surfing.

anyway….I know that there are just as many things about who I am that can put me in danger, especially in certain homophobic, sexist, pro-gun, hunting /animal agriculture communities. but I wanted to take a minute to reflect and remember to remember just how different I am treated than some of the other folks walking around these coastal towns with carrying all their possessions on their backs. are there ways for me to bridge these gaps? to make connections? I know I have so many more questions, I just don’t know how to work with them.

so now I will stare off into the sunset and see if I can sort some of this out! also, if you have any thoughts on these thoughts, please do share!

p.s. it’s been a few days now since I wrote this and I’ve had a couple other experience that reinforces my points. it comes in getting 3 lifts from people while I was stuck road walking. all 3 people stopped and offered rides and I wasn’t even trying. i thought about it, sticking my thumb out and all, but I didn’t. I’m very grateful for the rides. they all showed up just when I needed them! yes, mom, they were all very nice people trying to repay for rides they had gotten.

One thought on “checking some privilege ”